By integrating and pioneering some of the latest model advancements in the industry, Athearn is redefining model fidelity with Genesis 2.0.

Formed in 1971, Amtrak took over operation of most of America’s passenger trains with an assortment of old locomotives, primarily decades-old E-units. The carrier worked with General Motors Electro-Motive Division to design new passenger locomotives. The result was the SDP40F. Built by EMD from 1973–1974 for Amtrak and for a brief time they formed the backbone of Amtrak’s long-distance passenger fleet. With 150 built, the SDP40F became the “face” of Amtrak in the mid-1970s as they were found on the head ends of passenger trains from San Diego to Washington DC and from Seattle to Miami. Several were rebuilt and found a second life with the Atchison, Topeka and Santa Fe Railway in freight service.

The design of the SDP40F was based on the EMD FP45 passenger locomotive. Both shared the EMD 645E3 diesel engine, although the SDP40F had 16 cylinders instead of 20. The space saved from the smaller prime mover was given over to increased water capacity. The SDP40F had an underbody tank split between water and diesel fuel, carrying 2,000 gallons of water and 2,500 gallons of diesel. A second 1,500 gallon water tank sat in the carbody, forward of the steam generators which produced the steam needed for supplying heat (and sometimes cooling) and hot water for the train.

Eventually, the SDP40F was phased out as all-electric cars, such as the Amfleet, displaced the old steam heat rolling stock. While the SDP40F was designed with conversion to head-end power (HEP) in mind, the bad press they received, cost to upgrade and overhaul the units, and Amtrak’s satisfaction with the versatility of the HEP-equipped F40PH ultimately doomed the SDP40F. Amtrak was able to trade in the SDP40Fs to EMD as more F40PH units were acquired in the late 1970s. The last SDP40F was retired from Amtrak in the early 1980s.

In 1984, Santa Fe Railway traded lower-power locomotives to Amtrak for 18 SDP40Fs, horsepower-for-horsepower. The SDP40Fs were reconditioned in the railroad’s San Bernardino, California shops to the designation SDF40-2 for use as freight locomotives. Santa Fe replaced the hollow HTC bolsters with conventional HTC bolsters, converted the below-frame combination fuel/water tank to an all-fuel tank, removed the above-frame water tanks (replacing these with concrete ballast) and used the engines for nearly 15 years. They were also given front steps and platforms. Their noses were notched after a second maintenance shop visit in order to improve boarding access. In exchange, Amtrak received 43 smaller locomotives for use in switching service.

This page is based on the copyrighted Wikipedia article "EMD SDP40F"; it is used under the Creative Commons Attribution-ShareAlike 3.0 Unported License (CC-BY-SA). You may redistribute it, verbatim or modified, providing that you comply with the terms of the CC-BY-SA. 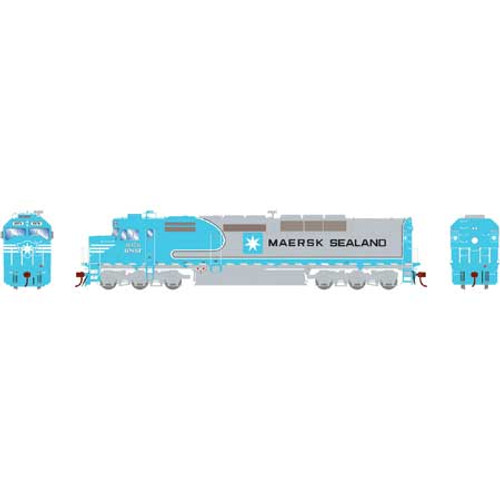