In 1973 Canadian National (CN) designed the safety cab, also known as the comfort cab, which featured a full-width nose that was intended to improve crew safety in the event of a collision. The first CN locomotives to feature this cab were GMDD GP38-2s and MLW M420s. GO Transit ordered the first safety cab equipped GP40-2s in 1973 with a three-unit order. CN then ordered their first safety cab GP40-2s from GMDD in 1974. Using CN’s locomotive classification system, these locomotives were assigned the designation GF-430 (General Motors, Freight, 4-axle, 3000hp). Letters are added after this designation to denote the separate orders for a given model.

Our model represents the GF-430d series, of which 34 were built in 1976: CN 9633-9667. This order was constructed using a standard GP40-2 frame. Earlier GF-430 models were built on a frame that was a noticeable 4-5 inches taller. GO Transit would order a total of 11 safety cab equipped GP40-2s and all were built with similar dimensions to the CN GF-430d series. These units were later sold to Canadian National and renumbered as CN 9668-9677.

The terminology “early” and “late” is used when referring to various road names on this run. “Late” CN and former CN units feature ditch lights, snow shields and have their air horn relocated to the top of the long hood. GO Transit units will be “early” in that they will not include ditch lights or snow shields, and the air horn will be mounted above the bell.

This GP40-2(W) model features many prototype-specific and separately-applied details, including: 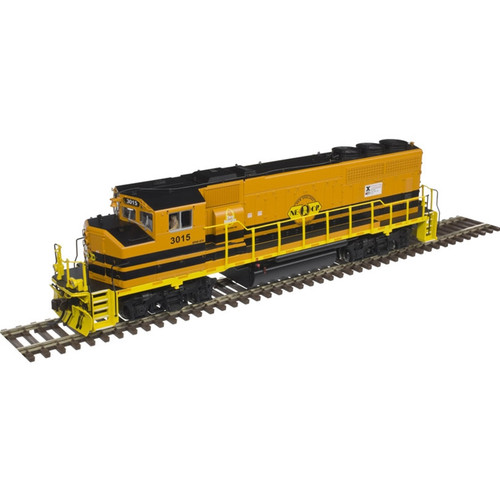