The SD70ACe is the successor to the older SD70MAC. Built from 2004 to 2014 in the United States, the SD70ACe was originally designed to comply with EPA Tier 2 locomotive emissions regulations. Beginning in 2012, newly built SD70ACes were EPA Tier 3 compliant. SD70ACes are equipped with EMDs 16-710-G3C-T2 prime mover, rated at 4,300 horsepower (3,200 kW). Later Tier 3 models are rated at 4,500 horsepower (3,400 kW). They are rated at 157,000 lbf (700 kN) continuous tractive effort (191,000 lbf (850 kN) starting). Braking effort is rated at 106,000 lbf (470 kN). Although mechanically similar to earlier SD70 units, the SD70ACe rides on a new underframe and uses mostly new sheet metal above the frame. Electrical cables and air lines have been routed beneath the walkways on opposite sides, allowing easier access for maintenance. Continuing the designs of the SD80 and SD90 series, the radiator on the locomotive is nearly as wide as the cab, the center hood section is a step down below the roofline, and the dynamic brakes have been moved to the rear of the hood. The SD70ACe uses the cab design of late-model SD90MAC-H units, which uses rectangular window glass and is externally different from the two cab variations used on earlier SD70M and SD70MAC units. In 2008, EMD standardized the isolated cab on subsequent SD70ACes after non-isolated cab units were restricted from leading on BNSF Railway due to excessive cab vibration. Purchasers included ArcelorMittal, BNSF Railway, Canadian National Railway, CSX Transportation, Ferromex, Kansas City Southern Railway, Montana Rail Link, Norfolk Southern Railway, CVG Ferrominera Orinoco, Union Pacific Railroad, Quebec North Shore and Labrador Railway, BHP Billiton, and shortline Arkansas and Missouri Railroad. 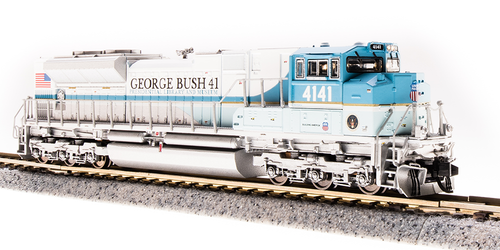