The definitive model of one of EMD’s best-selling locomotives, the ScaleTrains Rivet Counter SD40-2 combines performance with unparalleled road-specific detailing.

In January 1972, Electro-Motive Division (EMD) of General Motors would build the first production models of a locomotive design that would prove to be legendary: the SD40-2.  The flagship of the “Dash-2” series of 1972, the SD40-2 would build upon the lessons learned from its predecessor, the SD40.  While the sixteen-cylinder 645E3 turbocharged prime mover remained the same from its SD40 cousin, the SD40-2 boasted a modular, solid-state electrical system, which featured removable “cards” in place of troublesome relays in its high-voltage cabinet, greatly simplifying electrical troubleshooting and repairs.

Externally, the biggest change was the use of the new HT-C three-axle truck in place of the Flexi-coil C of the SD40.  The new truck promised greater adhesion, and was longer than the Flexi-coil C, necessitating an increase of the length of the SD40-2s frame to an overall length of 68’, 10” over the couplers.  This also had the effect of giving the SD40-2 its characteristic long walkway “porches” at each end.  Other small external improvements, such as longer battery box compartments, rear overhang on the cab roof, and drip rail over the front cab door, added to the list of external differences between it and the SD40.

Domestic production of the SD40-2 continued until July 1984 making it one of EMD’s most popular locomotives of all time.  Many remain in service today, both with original owners as well as secondhand operators.  Within the last five years, Norfolk Southern and CSX have rebuilt hundreds of SD40-2s to extend their operating life.  This will ensure this venerable locomotive’s presence on U.S. rails for decades to come. 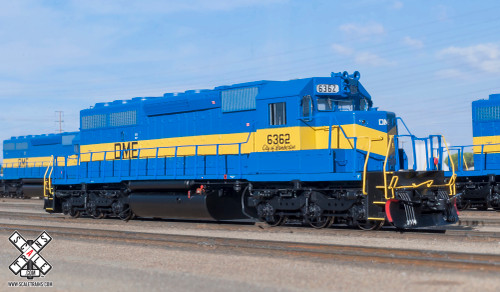