Introduced in 1969, the Bethlehem Steel Co. (BSC) F68-series of 100-ton, 68’ foot long (over end sills) flats represented a new generation of high-capacity flatcars.  The F68CH version was a general purpose flatcar while the F68DH was designed for heavy-duty loads.

For nearly five decades, the Bethlehem Steel Co. (BSC) F68 series of flatcars has crisscrossed the United States, Canada, and Mexico hauling a staggering variety of loads for Trailer Train Co.  Introduced in 1969, the F68-series of 100-ton, 68’ foot long (over the end sills) flats represented a new generation of high capacity flatcars.  Extremely versatile, the basic design could be equipped from the factory with a variety of appliances … end bulkheads, “finger racks”, and wood or steel plain decks … to handle different loadings on Trailer Train’s member railroads.

Building upon the success of the F68AH bulkhead and F68BH “finger rack” variants, Trailer Train would take delivery of the first F68CH flatcar from BSC in December 1970.  Intended as a general-purpose flatcar, it was essentially an F68AH flatcar, minus the bulkheads.  These cars, series TTMX 80625-80644, were equipped like their bulkhead-equipped brethren with 36” wheelsets in 100-ton trucks equipped with hydraulic snubbers (at opposite corners of the car), 15” EOCC to improve ride quality, and wood decks with integral tie-down channels.  All were delivered in the bright yellow “Trailer Train” scheme introduced earlier that year.

Shortly after the last F68CH flatcars were delivered, Trailer Train would produce one last F68-series variant: the F68DH.  The F68DH lacked bulkheads and was equipped with a deck intended for heavy-duty service.  Tie-down tracks ran the length of the car at the centerline and sidesills and were designed for heavy-duty chocks and chains for securing loads such as cable reels.  Trailer Train would receive four groups of F68DH flats with TTJX reporting marks from July 1971 through October 1973.  They were equipped like their other F68-series flatcars with 100-ton trucks, 36” wheels, hydraulic snubbers, and 15” EOCC. 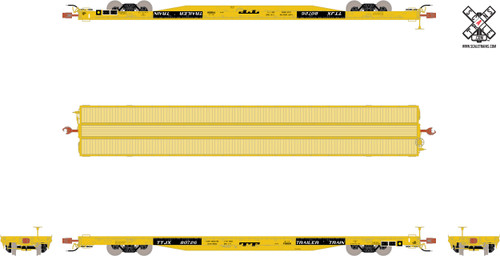